This article will discuss how to freely import and edit DNxHR MXF files in Premiere. Keep reading. 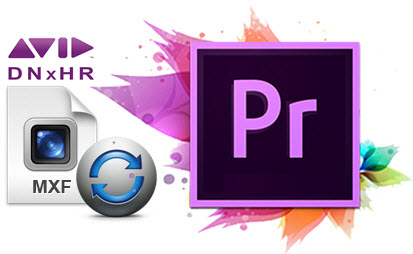 Some blogs on Google mentioned that rather then wait for Apple, Adobe had jumped right in and announced that they will basically circumvent Quicktime altogether, going to direct native support of ProRes, DNxHD & DNxHR files in a soon to be future releaseof Adobe Premiere. Once this happens Windows based Adobe Premiere editors will be able to edit DNxHR in Premiere without having codecs pre-installed on their machines. However, the thing seems not to be easy.

“So Im on resolve, color correct my footage, export to MXF and go to DNXHR 8Bit to export 4k footage. I try to throw it onto Premiere and it automatically crashed. (Im using a windows machine) Am I exporting this footage incorrectly on Resolve?”

Premiere issued a press release a couple months ago stating support for DNxHR, but they’ve never official said (to my knowledge, at least) when that will come. For now… DNxHR remains unsupported, I think. You will need to render into MPEG-2 in advanced before importing DNxHR .mxf to Premiere, most likely.

To achieve the goal, Brorsoft MXF Converter is highly recommended. It has ability to deal with almost all kinds of MXF videos like Panasonic P2, Canon MXF files, Sony XDCAM/XAVC .etc. for editing in NLEs with the optimized codecs. If you are a Mac user, pls turn to Brorsoft MXF Converter for Mac. Now download the software on computer and follow the guide below to start conversion.

>>1. Run the best DNxHD MXF Converter, and click the “Add” button to load .mxf videos. If you want to merge multiple clips just need to check the “Merge into one” box.

>>2. Click “Format” bar to determine output format. Follow “Adobe Premiere/Sony Vegas” and select “MPEG-2(*.mpg)” as the output format. Besides, you can also choose WMV (VC-1) (*.wmv) if you want to get a relatively smaller output file.

Tip: You can click “Settings” button to adjust the resolution, bitrate, etc. Just customize the parameters to meet your need.

After conversion, just run Premiere and import the generated .mpg files. You will find the output video work perfectly on Premiere CC/CS6/CS5.

2 thoughts on “DNxHR .mxf files not support in Premiere-Solution”